Skip to main content
Go to accessibility notice
Heritage is in the process of relocating its world headquarters to a new Dallas area location, which will be announced soon. Please call 214-528-3500 to confirm all Heritage appointments, events or deliveries in Dallas, as our departments and staff are moving at different times from separate locations.
Loading...
There are currently no items available for purchase in this Department. Search our Auction Archives below to find item values.
LOT #68004  |  Sold for: Sign-in or Join (free & quick) 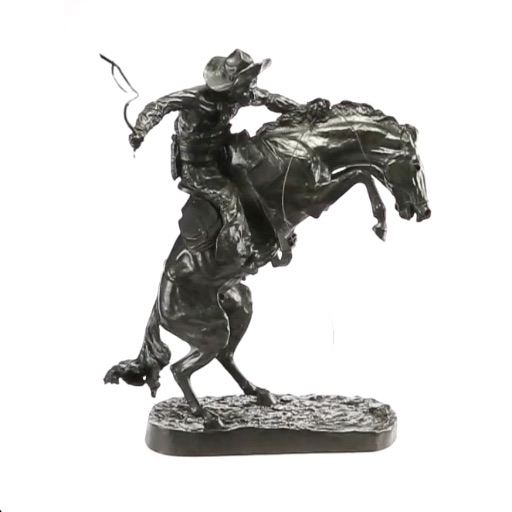 In a letter dated May 23, 2016, which accompanies this lot, Peter Hassrick, Director Emeritus and Senior Scholar, Buffalo Bill Center of the West, writes:

"Remington's The Broncho Buster, Roman Bronze Works number 17, was cast in lost wax with a sand cast base around 1902, and is an especially nice example of the artist's three-dimensional work. The Broncho Buster in its various permutations was America's most popular bronze in the 19th and early 20th centuries and is commonly regarded as one of the world's finest action bronzes. It combines naturalness, vitality, and a measure of academic restraint that set it apart for all sculptural work of its day. It has served many generations, through its iconic theme, as a symbol of a transforming American West. It celebrates two mythic Western protagonists, the cowboy and the wild horse, and is the essence of a wild yet tamable frontier. While paying tribute to horseflesh in its most spirited quest for freedom, it also portrays the cowboy as the harbinger of civilization.

"I feel that this is a perfectly fine example of an early RBW casting of Remington's The Broncho Buster and should be added to the artist's sculptural oeuvre."

We would like to thank Peter Hassrick for his gracious assistance in cataloging this work.


Condition Report*: We would like to thank Steve Tatti, Fine Arts Conservator, New York for conducting the below condition report. The sculpture is currently in overall excellent condition. The piece has been recently treated to correct condition issues such as: the stabilization of a loose/poorfitting roman joint in the proper right arm, the repair of a crack within the upper portion of the tail, the replacement of the spurs at the boot, the fabrication of a reign, and the reworking of the quirt. A new protective wax coating has been applied and the piece buffed to an even lustre.
*Heritage Auctions strives to provide as much information as possible but encourages in-person inspection by bidders. Statements regarding the condition of objects are only for general guidance and should not be relied upon as complete statements of fact, and do not constitute a representation, warranty or assumption of liability by Heritage. Some condition issues may not be noted in the condition report but are apparent in the provided photos which are considered part of the condition report. Please note that we do not de-frame lots estimated at $1,000 or less and may not be able to provide additional details for lots valued under $500. All lots are sold "AS IS" under the Terms & Conditions of Auction.